A downloadable demo for Windows

"But I love you." is a visual novel/dating sim...or at least, it starts off that way.

Once you get in town, the occupants all flock to you, intrigued by the stranded newcomer. At first, they try to help in their own little ways, but as they grow attached, they try to convince you to stay with them. Forever. That's when you notice things are very, very wrong in this town, from the datable characters to the setting. Once the player starts to notice a trend of the girls starting to be slightly, well, nuts, it becomes a horror game. The game still features multiple endings like a dating sim, some of them romantic, some where nothing happens, and a few where the player is...dead. You also have the option of ignoring all of the bad stuff and pretending everything is a-ok to keep scoring with the ladies.

Pre-order the full game here through the Paypal link: http://www.novellagaming.com/bily/

And please report bugs through the comment section. Thank you!

This is an old Video, but I'm going away from youtube, so I'm just posting the new link since the one on youtube is going to be deleted.

Has this project been abandoned? If so, thats a shame, it looks interesting.

:( I'm afraid so.
The project (and the demo) are -really- well made, and I'm so sad to see it gone.
At some point, not long after the demo was released, the communication from Novella gaming became more and more scarce.

We can only imagine something happened, that made it difficult to finish the game. (Probably ran out of money).
It's unfortunate, had hoped the very least, they managed to type a message that the project is dead, would be easier for everyone to move on, and not hope for an eventual lifesign, indefinetly

Amazing game! I can see from the demo that this will be an awesome game!Is there a release date? And will it be paid?

quick question is there way to make the game full screen?

if this game ends up being good, i will garentee that i tip the creator to asist in te continuation of this game, i will pledge $10 to this game (once i get paid on the 7th) if i end up enjoying it.

I saw your trailer, and even though I'm not really interested in playing it, I do wish you the best of luck on working on the game towards the finish line. #Confidence

A little disappointed that the demo is so short and that the project seems to have been abandoned? I enjoyed the initial bits that we did get to see. I do hope you pick the project up again soon!

Sad to see that the project hasn't had much if any development for a while, the demo showed some promise. It had some interesting characters and a decent story premise. The demo had a few issues, such as text repeating once or twice but that was it.

Perhaps it will be picked up again, and if it is I'll be quite interested in playing it.

The game is done the creator took the money from kick starter and ran and worked on other games.

The voice acting was the only thing that was left the game itself is done and hasn't been released.

I am working on the game at the moment in the starting stages.

Who's the creator that ran off?

Couldn't they get in legal trouble for taking all that money (it was 5x over the target goal, and 43k)

Like, that's really scummy, considering it was an extremely high amount of money.

Hope that wasn't the case but since the site where the full downloaded was hosted at was expired, it can only lead to comments from the kick-starters.
I believe now Kick-Starter has a stealthy penalty that goes outside KS website if Creators decide to 'ditch' a project and run off or attempt to run off with the money received.  Sadly, there's been issues of game-developers not completing projects(beta forever), canceling them(50% complete and drop), or completely ditching in a run-and-go(Fraudulent). It's even happened with mainstream companies (EverQuest:Next) but how they've been getting around it is through StarterPacks. Some websites give the option to extend and or pause a project, requiring a reason why (especially when it's funded). There's also a penalty system in-place if too many pauses are done within a segment of time, and how many times.

The only way to curb these bumps is for the users to penalize these said groups. Just like a contractor for a house, you can't just take a down-payment then run off and decide not the finish the building a customer paid for without it being considered a scam or a fraud. Why should it be less be concerned for games?

Amazing game!! Different from other games. In a really good way. I hope this will have a successful release! :-)

Demo was neat and the full game sounded promising; has the project been scrapped or is it just on hold?

I am one of the original kick starter backers. So what the other backers found out the game isn't done.

The voice actors didn't get called out or anything. The game isn't coming out it's dead.

Thanks for the update, that is a shame.

im not getting the game since its dead, but the description sounded promising

Yeah i decided to work on the game myself i am starting from scratch so  far it's going well but i need another programmer and  artists.

holy crap! ill look around on the internet for some programmers and artists, ill sure download/buy

I am  releasing the game for free. As many people that have bought into the kick starter already i don't want their money.

Because we got ripped off on that and yeah.. the goals were met i will be releasing the game free of charge.

I might be interested in programming for you if you still need one. Do you know what language you're going to use?

Renpy uses python i need some help with the dating sim part and i am working with some people doing the first chapter.

when is the game going to fully realse and are you going to have to pay?

So far I love this game I made a playthrough of it and I like it I hope to see a menu and Fullscreen mode and more stuff in the full version. I have made a Video about it so if you want to then, you can watch it here.

Any update on the full release of this game?

Did a playthrough of the demo! Loved it and hope to see a lot more of it. I will have to preorder it!

At the Vivian part, there seems to be a loop of the dialogue.

Also during the Vivian scene, I am not sure if it is intentional or not, but she seems to not express herself by changing sprites as much as the other girls. 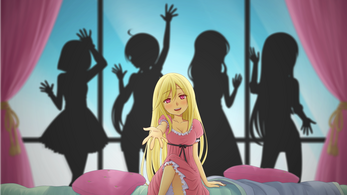